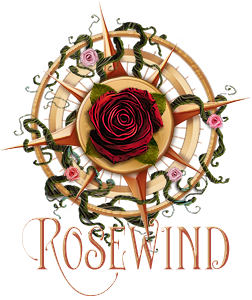 Rosewind is a division of Vesuvian Media, specializing in clean, contemporary, historical, fantastical, and holiday romance.

Lindy Ryan is an entrepreneur, award-winning professor, and publishing professional. In 2011, Ryan was part of the executive leadership team that founded Radiant Advisors, a data and business intelligence research and advisory firm, where Ryan developed and launched the company's editorial and research divisions, and later its data visualization practice, for clients that included 21st Century Fox Films, Fox Networks, Warner Bros., and Disney. Ryan served as an active member of the New Jersey Big Data Alliance and was previously a researcher at the Rutgers Discovery Informatics Institute, where she led a team studying digital literacy. Ryan is an award-winning professor of data analysis and visual analytics at Rutgers University. She is the author of numerous papers and two textbooks, The Visual Imperative: Creating a Culture of Visual Discovery (Elsevier) and Visual Data Storytelling with Tableau (Pearson). In 2017, Ryan launched Black Spot Books, a traditional small press focused on speculative fiction, which was acquired by Vesuvian Media Group in 2019. She currently serves on the Board of Directors for the Independent Book Publishers Association (IBPA). Ryan holds a Bachelor of Science degree in Business Administration: Entrepreneurship and Strategy, and a Master of Arts in Organizational Leadership and a Doctorate in Education, Organizational Leadership.

Italia Gandolfo has over 25 years’ experience in media including film/TV, publishing, advertising, and talent representation. She began her career at Creative Artists Agency (CAA) during the tenure of Founder/CEO, Michael Ovitz. Gandolfo researched classified projects while coordinating and assembling development information (domestic and foreign) for talent agents, writers, directors, producers, actors etc., and oversaw the agency’s library of confidential screenplays and manuscripts. She later moved into film finance and independent publishing. Gandolfo is the Founder and CEO of Vesuvian Media Group, Inc. and Gandolfo Helin & Fountain Literary Management.

Jo-Ann Carol has worked in the movie industry for over thirty-five years. She began her career as a script writer and later became a script analyst for major production companies. She was an agent at Monteiro-Rose-Dravis Literary Agency (Suzanne Collins HUNGER GAMES, Disney: PLANES, Martin Scorsese's HUGO) for several years before starting her own management company in 2013. Clients she has worked with have written and/or produced on DEXTER (Showtime), DA VINCI'S DEMONS (Starz), UNDERGROUND (WGN), OUTLANDER (Starz), WARRIOR NUN (Netflix), as well as for Hallmark, to name a few. She has written for several publications and newspapers, and her articles have appeared in numerous magazines.

A twenty-five-year veteran in International Business, Griffie works with Hong Kong development teams to determine what front line business needs will not be met by the enterprise solutions. Bridging those gaps and driving overall company success through streamlining, standardization, and automation, her solutions have provided substantial savings in excess of 7 figures per year.

The daughter of a rocket scientist and an artist, Griffie is an award-winning author and volunteers with EXP, who unites business people and educators to prepare students for a meaningful place in the world of tomorrow.

Holly Atkinson is an editor and writer who has worked with numerous authors over the past decade, including award-winning, New York Times and USA Today bestsellers. She began her career at Samhain Publishing (a press specializing in Romance and Horror) as an acquiring developmental editor before beginning her own editorial business. Holly graduated from Missouri State University with a Bachelor’s in English and an emphasis in Creative Writing.