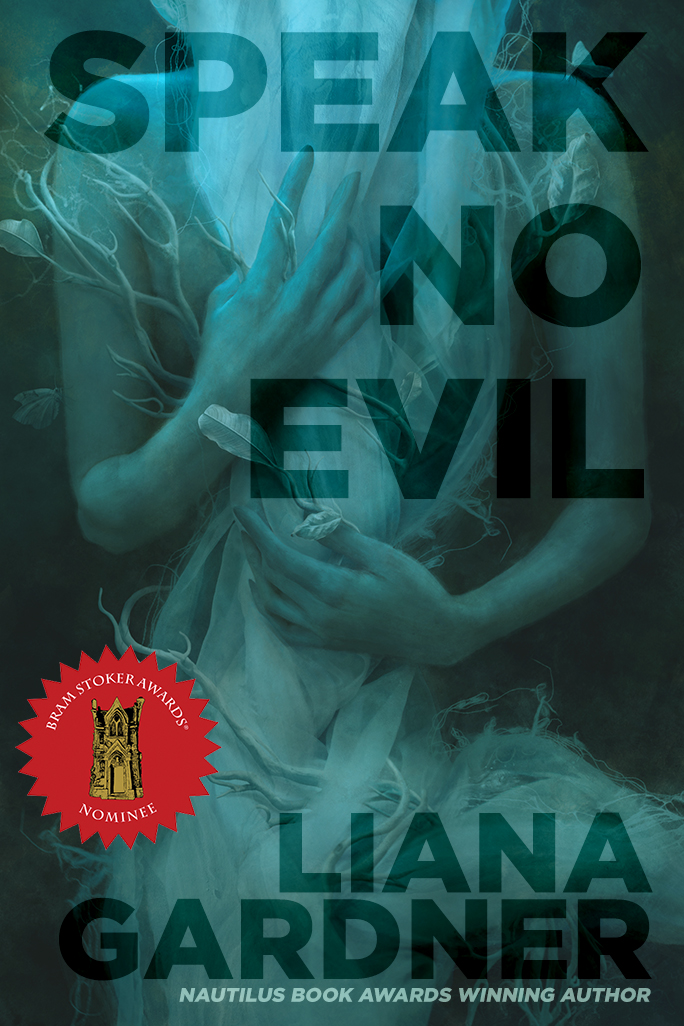 What if every time you told the truth, evil followed? The daughter of Appalachian snake handlers becomes a ward of the state after her eerie “gift” causes a tragedy that leaves her orphaned.

When sixteen-year-old Melody Fisher stabs a classmate, she goes before a judge to make her plea. There’s just one problem—she hasn’t spoken a word in two years. Speak No Evil unravels the mystery of why she went silent, peeling back the layers of her suffering.

The stabbing leaves Melody without a foster placement. Her longtime caseworker, Rebecca Prescott, must choose between being foster parent or caseworker, and knows she can do more as the latter. She finds a foster mother to homeschool Melody while Dr. Kane tries to get her talking in daily therapy sessions.

Reviewing Melody’s files, Dr. Kane connects with her through her ever-present MP3 player. Her songs reflect an idyllic childhood, loving parents, running in the mountains with her Cherokee father. By age five, her musical gift led her to sing solos at their snake-handling church, and she plays those songs for Kane. She sang rattlers calm on a snake hunt with Daddy—but that hunt led to the tragedy that upended her life.

Daddy sent nine-year-old Melody to fetch Mama on their return. She saw her mother by the creek with a man in a long coat, and unsettled, ran home. When Mama joined them, she swore she’d been alone. Distracted, Daddy lost his grip on a rattler, which bit Mama. He begged Melody to stop the poison, so she sang the snake song, but her Mama died.

Her grieving Daddy went up the mountain, and promised to return—but never did. With Easter coming, Melody prayed to God to bring Mama back. Her cruel Uncle Harlan took her in, and when she wouldn’t handle snakes at church, he locked her in a shed overnight with a rattlesnake. She survived that cold night by singing to the snake and letting it curl up with her for warmth. She told a teacher, and a social worker—Miss Prescott—took her away from her uncle to a home on the reservation with an old woman named Quatie Raincrow.

Over tea and cookies, the wise woman Quatie told her how Prescott herself had come to her as a shy foster child years ago: it’s hard to talk when your world falls apart. Melody found happiness with Quatie. As the old woman went after a weasel that had gotten her chickens, Melody sang the weasel into a squirrel trap, and begged Quatie to free it on the mountain. Quatie gave Melody an MP3 player, with a recording of Amazing Grace from one of her old church performances, where she could hear her father’s voice. When Kane asks Melody why they put her with such an old foster mother at first, she flies into a rage, trashing his office.

Kane gets mad when Melody’s new foster mother drags her into his office after catching the girl singing—proof her silence is a sham! But Kane calls it a breakthrough, and kicks the foster mom out. Melody acts embarrassed after wrecking the office, but Kane praises her for expressing herself. That’s the last thing she wants, though. She still won’t speak, so he acts out a conversation, answering his own questions in a high-pitched voice. Melody laughs, and says his name—but she can’t stop shaking, until Quatie appears in a vision, urging her to speak again.

Prescott convinces her boss to give Melody another caseworker, and she rushes an assignment of de-facto parent to become the girl’s guardian for the court case, and beyond. Melody is grateful for a permanent home with someone who’s always protected her, but nervous about a new high school. Next time Prescott brings her to Kane’s office, Melody gestures for her to stay as she plays songs that remind them both of Quatie.

Quatie visited Elder Lowrey on his deathbed. While eleven-year-old Melody waited outside, a strange man in ceremonial wolf dress led Lowrey out of the house. Quatie came out to say the Elder had died, which confused Melody, who told Quatie what she’d seen. The wise woman told Melody the man was Death and he was the same man who’d walked with Mama the day she died—Melody should not feel guilty because no one can stop Death once he comes. And Quatie had seen her own vision: Melody’s father had gone to help Mama cross over, and Death took him, too. This just makes Melody more certain she caused it all by speaking up.

Overcome by memories, Melody runs from Kane’s office. Prescott finds her and the two drive up the mountain, reliving how helpless they felt the day Quatie fell ill. The wise woman wound up in a nursing home, and Melody begged to live with Prescott, but instead moved in to her first loveless foster family, the Jacksons.

On her thirteenth birthday, Melody fled her foster home and stole a bike to visit Quatie. Melody tried to be positive, but Quatie had to hear about the Jacksons—the sadistic son and cruel father. Divining Melody’s future, Quatie suffered a seizure. Melody prayed hard, but when the emergency team ran in, with a strange priest who she recognized as Death, she knew her voice couldn’t save Quatie, when it had probably killed her.

Despondent after Quatie’s death, Melody avoided her foster family. She found a sick snake, and nursed it to health, like her father would, in a secret spot in the woods. But her foster brother found the snake and tortured it. Melody tried to save the snake, but Mr. Jackson arrived and decapitated it. Melody buried the head, but Jackson cooked the meat and force-fed it to her. When she fought back, he kicked her out.

Melody moves in with Prescott, and Kane probes into her time with the Hatchet family. With songs, she paints a picture of shame, regret, and anger. At her new school she befriends Kelly; his guitar playing reminds her of Daddy. She doesn’t want him to know about her crime, but when a jock calls her out on it, Kelly defends her as if he already knew.

Mr. Hatchet tormented Melody, calling her a slut, though she’d never even kissed a boy. Sadie Hatchet fought with her and any friend she made. Only the bedridden mother treated Melody well. If Mrs. Hatchet left her bedroom the rest of the family left Melody alone. She made a friend at school in Vince, who distracted her from the Hatchets, but even their friendship brought trouble when Melody fell for his friend James.

Mr. Hatchet caused the real horror, though, sneaking into her room at night to rape her at knifepoint, threatening to cut out her tongue. Melody didn’t make a sound—the one thing she could control, hiding in the music in her head. After, Hatchet would blame God for his urges and pray for mercy for his poor wife.

Melody’s relationship with James upset Vince, who’d fallen in love with her. Melody imagined sex with James as an escape from Mr. Hatchet—but she froze, her memories of Hatchet spoiling the moment. She couldn’t tell James why, and he got ugly, dumping her brutally in front of a crowd. Vince struck James, and ran to Melody, but she couldn’t explain to him either, and finally called to tell Prescott.

As Melody walked home from school, Sadie attacked her, furious that Melody’s accusation had put her father in jail and her mother in the hospital—when Sadie had kept silent about her own abuse so long. Melody was speechless, and Sadie beat her unconscious. She woke in the hospital, Vince by her side again. More than ever she didn’t want to talk, and popped her ear buds in to block him out.

Prescott tries to make her see that speaking up for herself got her out of the Hatchet household, and her Uncle Harlan’s—and she has to do it now to put the stabbing behind her. At school, Kelly opens up about a fight with his father, who wants him to give up music. Melody finally speaks, urging him to follow his dreams. She tells Kane and Prescott, who say it’s time to tell her story in court.

Melody’s gut is in knots when her so-called victim Troy enters the court. She doubts she can go through with it, even when Kelly and Vince show up to support her. But she takes the stand, and tells the judge how she’d stayed late at church to clean up after the Sunday school students’ arts and crafts—and Troy came looking for her. She falters at the part where Troy trapped her, but Quatie, Mama, and Daddy’s spirits urge her to go on, about how Troy’s hands reminded her of Hatchet, and her promise to herself to never let that happen again.

When she gets stuck again, Kane encourages her to use her gift, and she sings about how Troy raped her, but she grabbed the scissors off the counter and stabbed him in the shoulder.

Troy leaps up to deny it all, but the judge catches him in a lie, and declares the stabbing self-defense, dismissing the charges against Melody and placing Troy in custody. As the court clears, Vince approaches sheepishly and apologizes. When she doesn’t respond, he starts to go, but Melody runs to him, and she sings her heart out.